Mars Express Status Report - March 2008
Overall Mission, Payload, and Science Planning Status
On 2 October 2007 Mars Express successfully performed a close flyby of Phobos coming to within ~140 km of the moon. During the flyby a number of the HRSC observations were unfortunately lost due to an overload of the system. The impact of this is relatively small as HRSC already has acquired a lot of detailed Phobos data during past observations. The data from MARSIS for this close flyby, which are unique, are being analyzed.
Date: 18 Mar 2008
Mars Express Status Report - November 2007
The 2007 eclipse season ended on 31 August; preparations for the 2008 eclipse seasons, with long eclipses during aphelion, started in October. The Phoenix EDL (Entry-Descent-Landing) support will take place during the 2008 eclipse season. In preparation for this Phoenix support a number of tests were performed between Melacom (Mars Express communications system for Beagle-2) and the MER rovers. These included interference tests between Melacom and ASPERA/MARSIS.
Date: 19 Nov 2007
Mars Express Status Report - May 2007
Mission Status
The spacecraft has been operating nominally, and with the Earth-Mars distance decreasing, the data rate is continuously increasing, allowing for a commensurate increase in data return.
Date: 23 May 2007
Posted by Red Helix at 4:08 PM No comments: 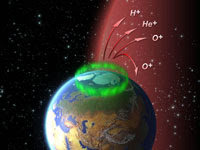 Earth's oxygen escaping from Earth's polar regions
Cluster watches Earth’s leaky atmosphere
28 August 2008
Oxygen is constantly leaking out of Earth’s atmosphere and into space. Now, ESA’s formation-flying quartet of satellites, Cluster, has discovered the physical mechanism that is driving the escape. It turns out that the Earth’s own magnetic field is accelerating the oxygen away.
The new work uses data collected by Cluster from 2001 to 2003. During this time, Cluster amassed information about beams of electrically charged oxygen atoms, known as ions, flowing outwards from the polar regions into space. Cluster also measured the strength and direction of the Earth’s magnetic field whenever the beams were present. Hans Nilsson, Swedish Institute of Space Physics, headed a team of space scientists who analysed the data. They discovered that the oxygen ions were being accelerated by changes in the direction of the magnetic field. “It is a bit like a sling-shot effect,” says Nilsson.
Before the space age, scientists believed that Earth’s magnetic field was filled only with particles from the solar wind, the constant sleet of particles that escapes from the Sun. They thought this formed a large cushion that protected the Earth’s atmosphere from direct interaction with the solar wind.
“We are beginning to realise just how many interactions can take place between the solar wind and the atmosphere,” says Nilsson. Energetic particles from the solar wind can be channelled along the magnetic field lines and, when these impact the atmosphere of the Earth, they can produce aurorae. This occurs over the poles of Earth. The same interactions provide the oxygen ions with enough energy to accelerate out of the atmosphere and reach the Earth’s magnetic environment.
The Cluster data were captured over the poles with the satellites flying at an altitude of anywhere between 30,000 and 64,000 kilometres. Measurements taken by earlier satellites during the 1980s and 1990s showed that the escaping ions were travelling faster the higher they were observed. This implied that some sort of acceleration mechanism was involved and several possibilities were proposed. Thanks to this new Cluster study, the mechanism accounting for most of the acceleration has now been identified.
At present, the escape of oxygen is nothing to worry about. Compared to the Earth’s stock of the life-supporting gas, the amount escaping is negligible. However, in the far future when the Sun begins to heat up in old age, the balance might change and the oxygen escape may become significant. “We can only predict these future changes if we understand the mechanisms involved,” says Nilsson.
For now, Cluster will continue collecting data and providing new insights into the complex magnetic environment surrounding our planet.
copyright http://www.esa.int/
Posted by Red Helix at 7:51 PM 1 comment: 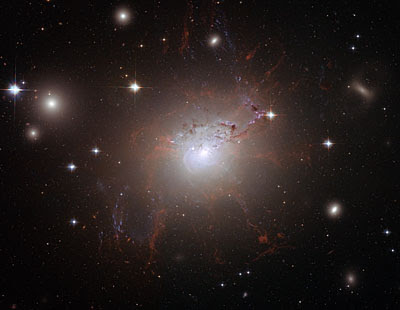 Download:
HI-RES JPEG (Size: 1633 kb) HI-RES TIFF (Size: 27 203 kb)
This stunning image of the giant, active galaxy NGC 1275 was taken using the NASA/ESA Hubble Space Telescope’s Advanced Camera for Surveys in July and August 2006. It provides amazing detail and resolution of fragile filamentary structures, which show up as a reddish lacy structure surrounding the central bright galaxy. These filaments are cool despite being surrounded by gas that is around 55 million °C. They are suspended in a magnetic field which maintains their structure and demonstrates how energy from the supermassive black hole hosted at the centre of the galaxy is transferred to the surrounding gas.
By observing the filamentary structure, astronomers were, for the first time, able to estimate the magnetic field’s strength. Using this information they demonstrated how the extragalactic magnetic fields have maintained the structure of the filaments against collapse caused by either gravitational forces or the violence of the surrounding cluster during their 100-million-year lifetime. The entire image is approximately 260 000 light-years across. Credits: NASA, ESA and Andy Fabian (University of Cambridge, UK)
http://www.esa.int
Posted by Red Helix at 7:39 PM No comments: