Cosmologist, astrophysicist, and physicist Stephen Hawking showed, in 1974, that black holes should emit electromagnetic radiation with a black body spectrum; this process is also called black hole evaporation. In brief, this theoretical process works like this: particle-antiparticle pairs are constantly being produced and rapidly disappear (through annihilation); these pairs are virtual pairs, and their existence (if something virtual can be said to exist!) is a certain consequence of the Uncertainty Principle. Normally, we don’t ever see either the particle or antiparticle of these pairs, and only know of their existence through effects like the Casimir effect. However, if one such virtual pair pops into existence near the event horizon of a black hole, one may cros
s it while the other escapes; and the black hole thus loses mass. A long way away from the event horizon, this looks just like black body radiation.

It turns out that the smaller the mass a black hole has, the faster it will lose mass due to Hawking radiation; right at the end, the black hole disappears in an intense burst of gamma radiation (because the black hole’s temperature rises as it gets smaller). We won’t see any of the black holes in the Milky Way explode any time soon though … not only are they likely still gaining mass (from the cosmic microwave background, at least), but a one sol black hole would take over 10^67 years to evaporate (the universe is only 13 billion years old)!

There are many puzzles concerning black holes and Hawking radiation; for example, black hole evaporation via Hawking radiation seems to mean information is lost forever. The root cause of these puzzles is that quantum mechanics and General Relativity – the two most successful theories in physics, period – are incompatible, and we have no experiments or observations to help us work out how to resolve this incompatibility.

Read more: http://www.universetoday.com/40856/hawking-radiation/#ixzz28swrEIHf
***End Quote***
(C) RS
we are of course assuming all matter falling into the back hole is the opposite of what the black hole is composed of ...
but on average both positive and negative particles will have fallen in and thusly the energy
balance should be Zero unless the black-hole carries a polarised charge :-)
so let us summarise infinite equal distributions of positive and negative = 0 if annulled,
it is also possible the created mater replaces information with information and thus new information replaces old.

such information replacement would be in line with thermodynamics : the increase of uniformity within a system (cerca 1979) and random rather than ordered data...

such a process can be found in VHS Tapes.
and that's if the matter inside the black hole carries a charge since it might not..

black holes and the big bang

well i was wandering about the theories concerning black holes
and wandering if prahapse there was just to much energy to create black holes in the big bang
according to a paper i read the other day ; light in high enough densities would be able to form a black hole...
so onto the big bang...
what sort of light levels where we talking about ?
was there such a thing as light during the instance of the big bang ....

energy levels where presumably high enough that ..
densities go well beyond those of a black hole in our universe
so one wonders perhaps  about the creation of matter and its relevance to the laws of black holes,

so if one is wondering about the expansion of the universe one can observe a possible solution to energy dispersal ...

in the form of wormhole transference :
billions of wormholes form and simultaneously transfer the energy to a massive amount of space..

that is a possibility , white holes

infinity is a rather large concept isn't it.

also we can observe a positively astounding concentration of matter in the form of suns ....

simple truth is repulsion must be a force that prevents the formation of black holes ; since our own sun is still active as a sun :-)
and to be honest that must play a factor in the big bang..

for according to my theory the matter to form a black hole should be in a low energy state and yet of high enough density and thusly ; durring the big bang the question is :
was the formation of black holes actually forbidden ?

what quantum states did it form ?

was it positive and negative ?

what kind of charge did it carry... ?

*life is an astounding thing ; never forget that*
Posted by Red Helix at 12:50 PM No comments:


ohm's law of the borg

there are so many of us
Resistance becomes futile

for you may resist us one at a time but together ...
no resistance shall exist 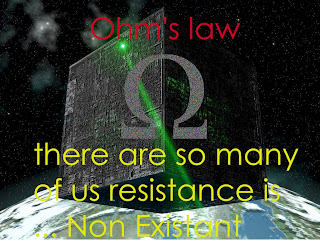